Flask is a web development framework. It provides a lot libraries for building lightweight web applications in python. Flask is considered by many as a micro-framework due to the fact that it only provides the essential components – things like routing, request handling, sessions, and so on. It provides you with libraries, tools, and modules to develop web applications like a blog, wiki, or even a commercial website. It’s considered “beginner friendly” because it doesn’t have boilerplate code or dependencies which can distract from the primary function of an application. Data handling handling for example, the developer can write a custom module or use an extension.

What is Flask used for?

Flask is mainly used for backend development, but it makes use of a templating language called Jinja2 which is used to create HTML, XML or other markup formats that are returned to the user via an HTTP request.

Note that in this series of tutorial, we’ll be using Flask as a backend framework and React as a frontend framework.

The goal of filters is to reduce the number of documents that have to be examined by the query. Queries have to not only find matching documents, but also calculate how relevant each document is, which typically makes queries heavier than filters. Also, query results are not cachable. Filter is quick to calculate and easy to cache in memory, using only 1 bit per document. These cached filters can be reused efficiently for subsequent requests.

When to Use filter vs query?

As a general rule, use query clauses for full-text search or for any condition that should affect the relevance score, and use filter clauses for everything else.

There are two ways to filter search results.

The term filter is used to filter by exact values, be they numbers, dates, Booleans, or not_analyzed exact-value string fields. Here we are filtering out all users whose rating is not 5. In other words, only retrieve users with rating of 5.

The range filter allows you to find numbers or dates that fall into a specified range. Here we are filtering out all users whose rating is either a 2, 3, or 4.

The exists and missing filters are used to find documents in which the specified field either has one or more values (exists) or doesn’t have any values (missing). It is similar in nature to IS_NULL (missing) and NOT IS_NULL (exists)in SQL.

Here we are filtering out all users that have logged into the system.

Imagine having to execute a long running process and waiting for it to finish, most likely you are connected via ssh and you can’t do anything else but waiting for that process to finish. When the process is taking too long your connection will time out and you will be kicked out. When that happens your process will stop its execution and you will have to rerun it. This is painful and here is where screen comes into the picture.

For example, you are downloading a big file or a database using mysql dump command. This usually takes 10 to 20 minutes.

You can use the Linux screen command to push running terminal applications or processes to the background and pull them forward when you want to see them. It also supports split-screen displays and works over SSH connections, even after you disconnect and reconnect.

How does screen work?

The usual operation with screen is to create a new window with a shell in it, run a command, and then push the window to the background (called “detaching”). When you want to see how your process is doing, you can pull the window to the foreground again (“reattach”) and use it again. This is great for long processes you don’t want to accidentally terminate by closing the terminal window.

Once you’ve got a screen session running, you can create new windows and run other processes in them. You can easily hop between windows to monitor their progress. You can also split your terminal window into vertical or horizontal regions, and display your various screen windows in one window.

You can connect to a remote machine, start a screen session, and launch a process. You can disconnect from the remote host, reconnect, and your process will still be running.

You can share a screen session between two different SSH connections so two people can see the same thing, in real-time.

This will open a screen session, create a new window, and start a shell in that window.

Most used commands for a screen window

Detach from a screen session

The program running in the screen session will continue to run after you detach from the session.

Reattach to a screen session

Make sure you on the screen session and then run the exit command.

or run this command out of the screen session

When running queries in your production environment, you have to be careful so you don’t bring it down or make a mistake that will cause your environment to act abnormally.

Here are some things you need to be careful about:

The MySQL READ UNCOMMITTED, also known as “dirty read” because it is the lowest level of isolation. If we specify a table hint then it will override the current default isolation level. MySQL default isolation level is REPEATABLE READ which means locks will be placed for each operation, but multiple connections can read data concurrently.

Make sure that when running queries that your dev database server has the same version as your production database server. If they have to be in different versions the production server must be in higher version than the dev server. In most cases where the version is not the same the dev server is in higher version so be careful about that. The reason for this check is that you may have a query that works in dev and won’t work in production because the query uses functions that the production server does not support. For example. JSON_ARRAYAGG  is not in mysql version 5.7. My dev server was in mysql 8 and production server was in 5.7. Not until release day that I realized my database migration was not going to work in production and had to pull it back.

If possible, run insert/update migration scripts during slow or off hours. There is a good chance you will run into issues especially with updating data based on existing data in the database. You might not be reading live data to perform updates as users are using and updating your data.

Always have someone else take a second look at your query

MySQL stores JSON documents in an internal format that allows quick read access to document elements. The JSON binary format is structured in the way that permits the server to search for values within the JSON document directly by key or array index, which is very fast.

Evaluates a (possibly empty) list of key-value pairs and returns a JSON object containing those pairs. An error occurs if any key name is NULL or the number of arguments is odd. 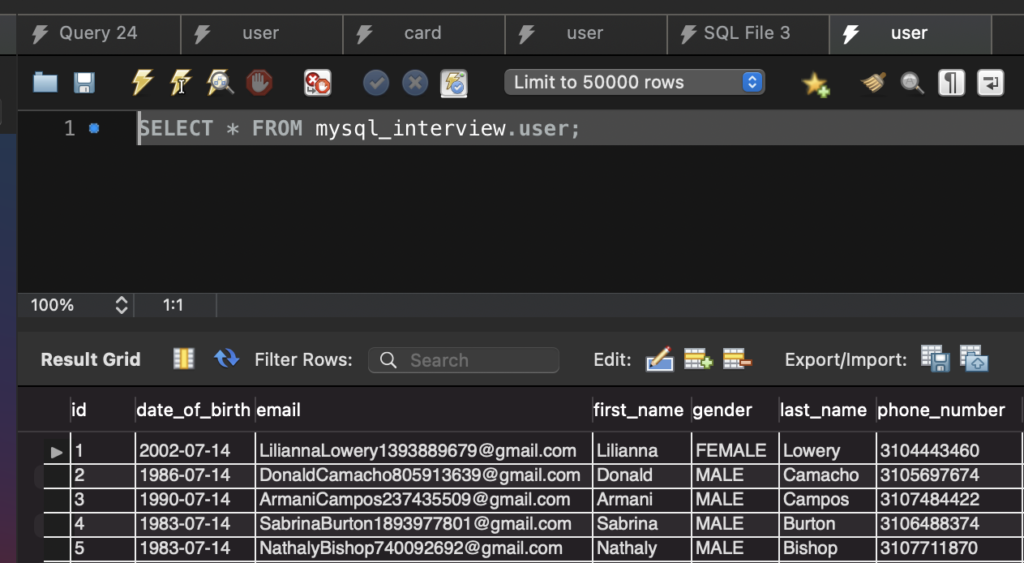 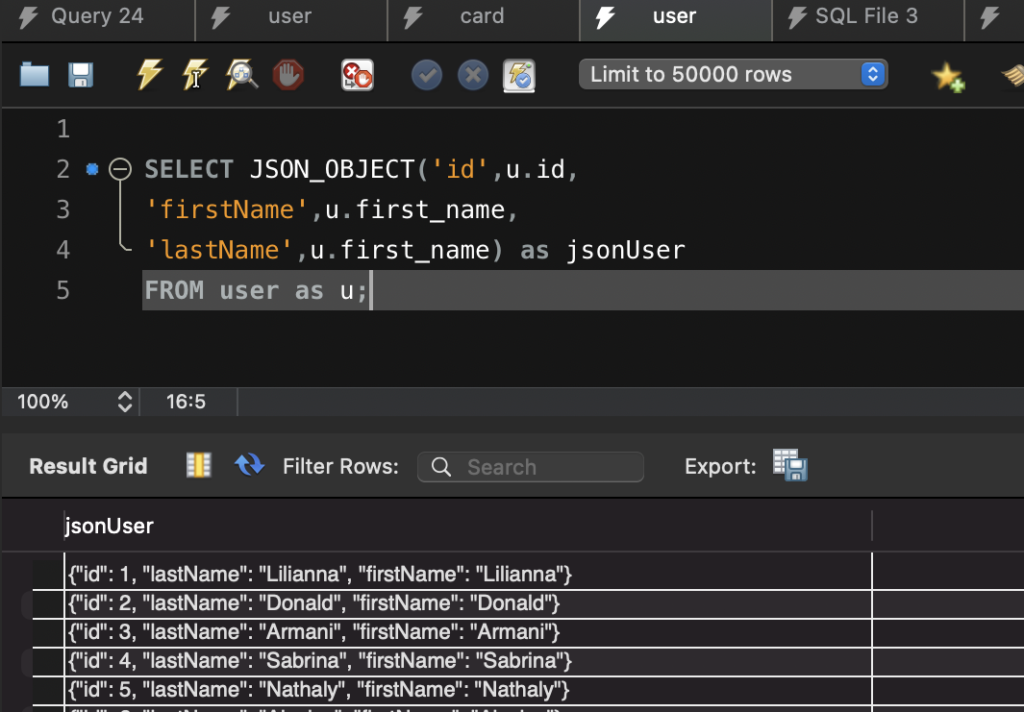 Evaluates a (possibly empty) list of values and returns a JSON array containing those values. 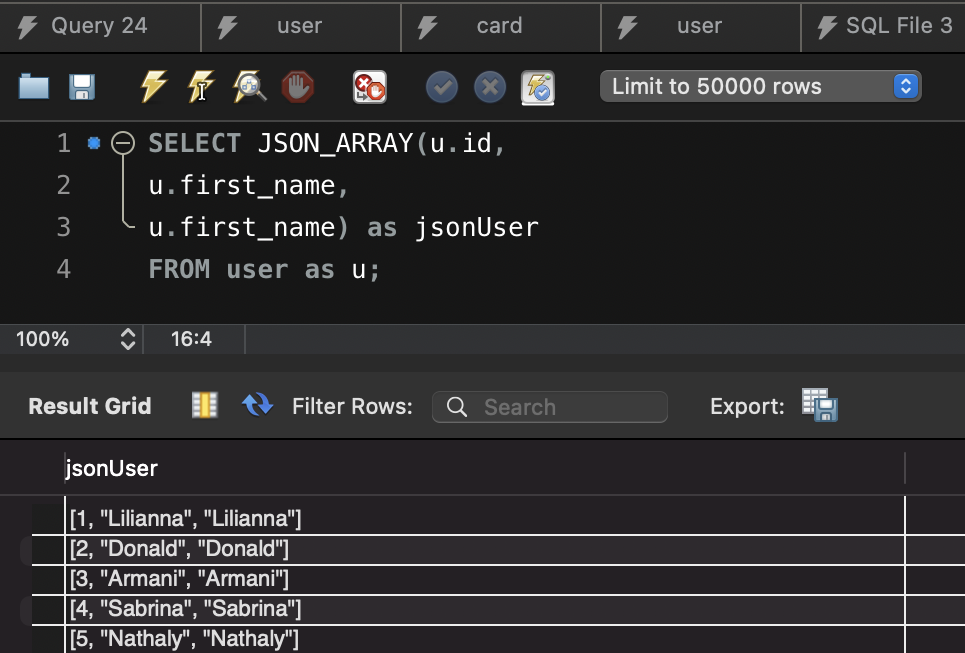 Takes two column names or expressions as arguments, the first of these being used as a key and the second as a value, and returns a JSON object containing key-value pairs. Returns NULL if the result contains no rows, or in the event of an error. An error occurs if any key name is NULL or the number of arguments is not equal to 2. 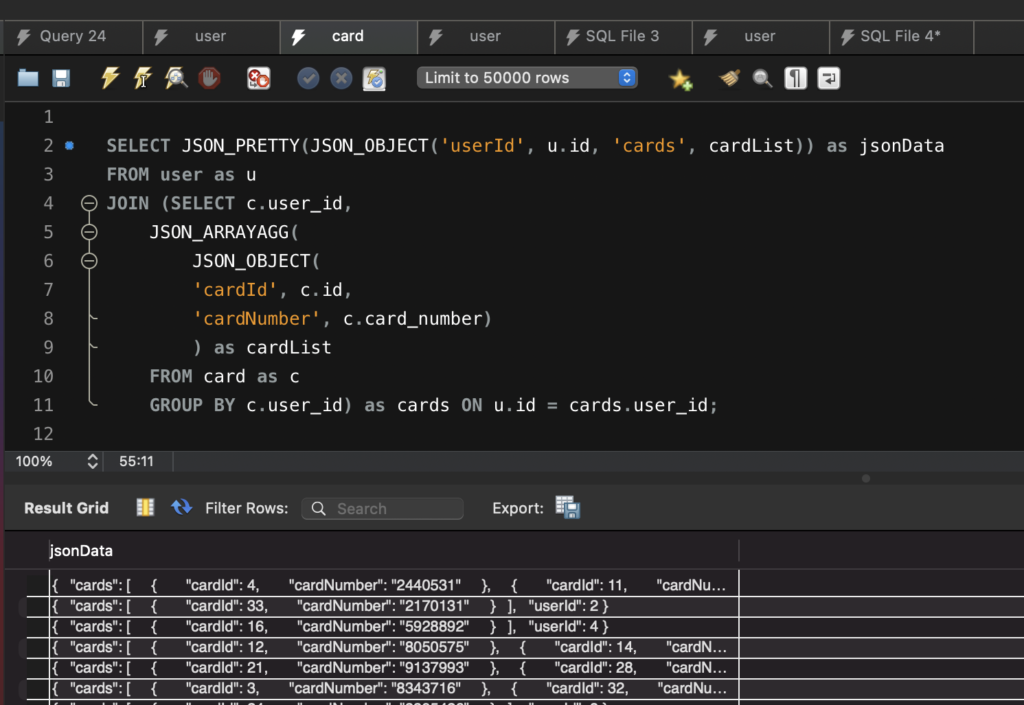 How to accomplish JSON_ARRAYAGG before version 5.7.8

Provides pretty-printing of JSON values similar to that implemented in PHP and by other languages and database systems. The value supplied must be a JSON value or a valid string representation of a JSON value. 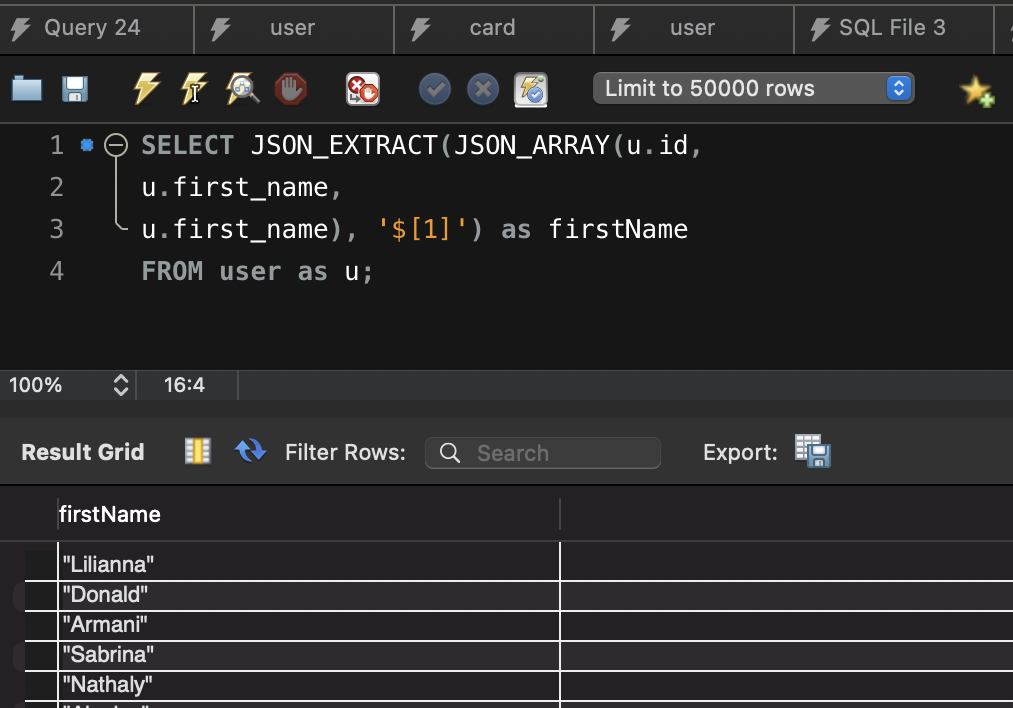