QuickSort is a Divide and Conquer algorithm. It picks an element as pivot and partitions the given array around the picked pivot. There are many different versions of quickSort that pick pivot in different ways.

The key process in quickSort is partition(). Target of partitions is, given an array and an element x of array as pivot, put x at its correct position in sorted array and put all smaller elements (smaller than x) before x, and put all greater elements (greater than x) after x. All this should be done in linear time.

An example of quicksort.

Explanation with an example

Step 2: The main array after the first step becomes

Step 3: Now the list is divided into two parts: 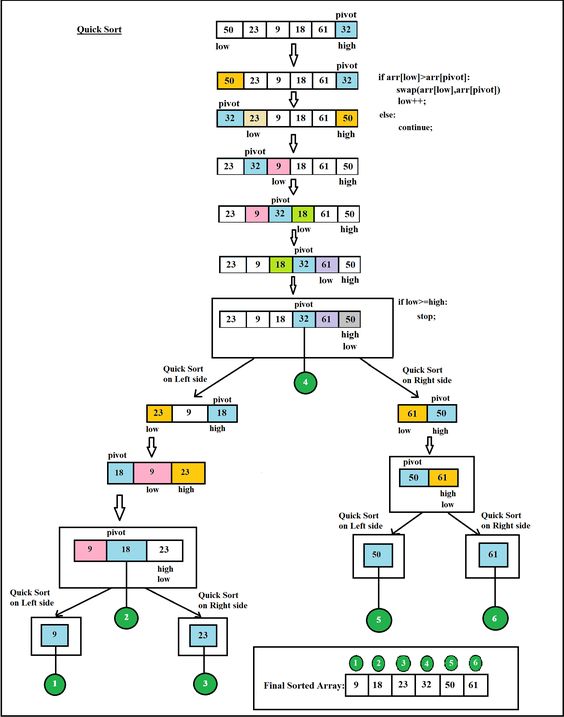 Is Quick Sort a stable algorithm?
Quick sort is not a stable algorithm because the swapping of elements is done according to pivot’s position (without considering their original positions). A sorting algorithm is said to be stable if it maintains the relative order of records in the case of equality of keys.

What is Randomised Quick Sort? Why is it used?

Why Quick Sort is better than Merge Sort?

Which is faster quick sort or merge sort?
Quick sort is faster than the merge sort. Please refer the above question.

Where is quick sort used?
Quick sort is basically used to sort any list in fast and efficient manner. Since the algorithm is inplace, quick sort is used when we have restrictions in space availability too. Please refer to the Application section for further details.